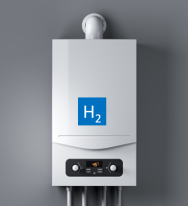 Recent work, such as the H21 Leeds City Gate study, has shown that conversion of UK gas distribution networks is feasible and could help to decarbonise the heating of buildings. A hydrogen-ready boiler is intended to provide a like-for-like replacement for an existing natural gas boiler. Manufacturers such as Baxi and Worcester Bosch are currently working on prototypes of hydrogen-ready boilers which will work with natural gas but can be switched to 100% hydrogen when required but they are not currently available to buy.

The major advantage of a hydrogen-ready boiler is that it can continue to use natural gas until hydrogen gas is available. This will allow the whole country to transition to the low carbon alternative in a strategic way and with almost no disruption to home heating.

About 35% of the existing gas network in Britain has already been converted to PVC lined pipes which are ideal for hydrogen. Clearly the conversion of the remaining network has to be completed before the whole system can convert to hydrogen. In the meantime manufacturers like Worcester Bosch are well on the way to developing hydrogen ready gas fired boilers which will allow conversion to hydrogen in a seamless way. The government has yet to commit to converting the full gas network to hydrogen. A recent report by the Fraser Nash Consultancy estimated that it could take up to 16 years to complete the total conversion to Hydrogen with the current available workforce.

A hydrogen fuel cell breaks down hydrogen into its different parts to generate electricity. As a by-product of this process, heat is also produced which can be used to heat the home. A fuel cell is therefore potentially a source of both heat and power. Combined heat and power boilers feature fuel cells that generate electricity while at the same time creating heat that can be harnessed to provide hot water and central heating.